What Is The Burden Of Proof Under Oregon State Law?

If you have sustained an injury that was caused by the careless, negligent, or intentional actions of another person in Oregon, you may be able to recover compensation for your losses through a personal injury lawsuit. While this may seem straightforward, an Oregon personal injury lawsuit can be incredibly complicated. The person who is making the personal injury claim is given a “burden of proof,” which means that they must back up their allegations with a certain level of proof in order for their claim to be successful. 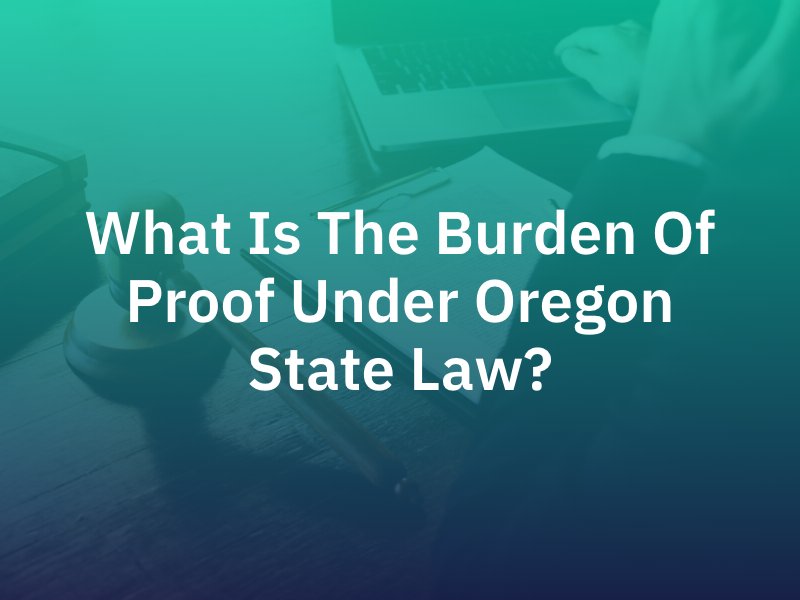 The burden of proof differs depending on the type of case

A preponderance of evidence means that the plaintiff in the case (the injury victim) must prove that what they are saying that the alleged defendant (the at-fault party) did is “more likely than not” to have happened. In these cases, a jury will examine whether or not the evidence presented showed that something more likely than not occurred.

The jury in these cases can still have doubts about the case and whether the defendant was actually at fault. In a criminal court, this doubt would mean that the defendant would likely be found not guilty. However, in an Oregon personal injury case, a preponderance of evidence will likely result in the defendant having to compensate the plaintiff for their losses.

Oregon operates under a modified comparative negligence system. This means that a plaintiff can still collect compensation for their injuries even if they are partially to blame for the incident that caused them harm, so long as the fault attributed to them does not exceed 51% of the total fault for the incident. However, the amount of compensation they receive will be reduced based on their percentage of fault.

Even though the requirement for a “preponderance of evidence” is not as stringent as “beyond a reasonable doubt,” victims of a personal injury still need to obtain as much evidence as possible about the actions of the negligent party. A plaintiff or their attorney needs to work diligently to secure any photo or video surveillance of the incident, statements from eyewitnesses, accident reports, and more. The plaintiff and their attorney should work with medical and economic experts to properly assess their injuries and help calculate total losses so they have a strong case to present to the jury.