Misread X-Ray: What You Can Do

Posted on April 7, 2021 in Medical Malpractice

We rely on quality medical care when it comes to emergency situations, particularly when we have any internal types of injuries. This includes broken and dislocated bones, which can often only be diagnosed with the use of an x-ray. However, what happens when injuries go undiagnosed despite the fact that an x-ray was taken? Misreading an x-ray could be a case of medical malpractice. When this occurs, victims may be able to secure compensation for their injuries or the worsening of an existing injury. Here, we want to discuss what you can do if you or a loved one have been injured because an x-ray was misread. 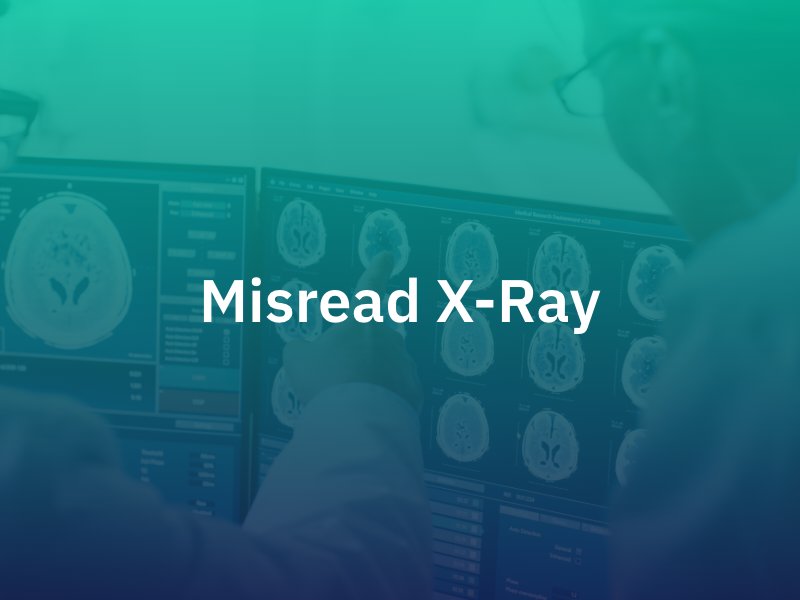 Who Reads an X-Ray?

Most people just assume that their x-ray will be read by the doctor they talk to when they experience a medical emergency. However, this is not necessarily the case. In an ideal scenario, an x-ray or any other type of imaging scan will be “read” by a radiologist. A radiologist is a doctor who has received specialized training in interpreting internal images such as x-rays, CT scans, MRIs, etc.

After a radiologist reads an x-ray, they will prepare a written report that goes into the patient’s charts. If the x-ray does show an injury, the treating physician typically gets an immediate call from the radiologist so that medical care can begin quickly.

However, there is no guarantee that an x-ray taken outside of a hospital will be read by a radiologist. All doctors have limited training in interpreting x-rays. The total amount of training each doctor receives is typically not extensive, and it may have come years earlier. In particular, primary care physicians (such as family care doctors or doctors inside a general clinic) often read x-rays and do not send them off to radiologists. This could lead to errors occurring.

Why do These Mistakes Happen?

There are various ways that misread x-rays can occur. First, even when a radiologist receives and interprets an x-ray, they can still make mistakes. This could occur due to a lack of training or a simple oversight.

What is much more likely to happen in these situations is that an undertrained medical professional conducts the “reading” of the x-ray and misinterprets what they have seen. In many cases, doctors outside of a hospital should send x-rays to an independent radiologist for reading. This is not very difficult to do anymore, particularly because x-ray images can be sent electronically.

What can Happen if an X-Ray is Misread?

If an x-ray is misread, the reality is that an injury will likely go undiagnosed. When an injury goes undiagnosed, this could significantly worsen the patient’s condition. For example, suppose a person goes to a general clinic because they have hurt their foot. The doctor will likely order an x-ray of that foot.

However, what happens if, after reading the x-ray that was taken at their office, a doctor erroneously determines that there are no broken bones in the foot?

The doctor would not send the patient to a specialist (a podiatrist or an orthopedist) for treatment. As a result, a patient would likely walk around with a broken foot for a substantial period of time until they went somewhere else to receive a proper diagnosis and receive treatment.

Delayed treatment could result in irreparable harm. This theoretical scenario is not as uncommon as you might think. Unfortunately, misread x-rays can occur in situations far more harmful than only a broken foot. If a person has a suspected broken rib that is not properly diagnosed, this broken rib could lead to significant internal injuries, including lung damage.

Any person who suspects that they have been the victim of medical malpractice caused by an unread x-ray or another type of imaging should seek assistance from an attorney who can help determine the best steps moving forward.