The Fourth of July weekend is one of the busiest travel holidays of the year.  In fact, AAA estimated that nearly 40 million Americans took a road trip of 50 miles or more on Independence Day last year.

However, with the increase in traffic and celebration comes a dramatic increase in fatal motor vehicle crashes.

At Paulson Coletti, our Portland personal injury attorneys want to positively impact the safety of those around us.  So, we worked with data visualization firm 1Point21 Interactive to analyze nearly 165,000 fatal crash records and isolate all crashes that occurred during the Fourth of July weekend.

This represents a 27 percent increase in fatalities over a typical day during those years.

Risk from Drunk Drivers and to Pedestrians Increased As Well

It’s more than an increase in overall fatal crashes and fatalities, however.  Drunk driving fatalities and pedestrian fatalities increase sharply during the Independence Day weekend as well.

*Figures in red represent an increase in traffic fatalities during the Fourth of July period, while those in blue represent a decrease.

While we found that, nationally, motor vehicle crash fatalities increase 27 percent during this period, the impact is a mixed bag at the state level.   All but four states ( Connecticut, New Jersey, Georgia and Arkansas) saw some level of increase in fatalities during the holiday period.  However, 30 states and the District of Columbia had fatalities spike more than the national average (of 27 percent).

An Increased Risk of Being Killed By a Drunk Driver

BBQs and drinking are closely tied to Independence Day celebrations and the numbers reflect this fact.  We found that during the Fourth of July holiday period, 40 percent of all traffic fatalities involved at least one drunk driver (.08 or greater).  This is significantly higher than the nearly 30 percent of the five-year period as a whole.

At that state level, North Dakota had the highest percentage of alcohol-related fatalities.  In fact, every single traffic fatality in North Dakota during the Fourth of July period involved a drunk driver – the only state where this is true.

Which States Have the Highest Percentage of Traffic Fatalities Involving Drunk Drivers?

The Most Dangerous Times of Day to Be on the Road

When are you most likely to be killed in an Independence Day crash?

Of the days included, the Fourth of July is far and away the deadliest day – with 633 traffic deaths over the 5 year period (with 276 involving a drunk driver).

The block of 9 pm to 12 am had the three highest fatality totals.  The highest number of drunk driving fatalities occurred between the hours of 11 pm and 12 am as well, with 95 deaths.

4th of July Fatalities by County

Only 17 counties saw 10 or more traffic fatalities during the holiday period, with Los Angeles, California county leading the way by a significant margin with 43 deaths – followed by Harris County, Texas with 24 and Maricopa County, Arizona and Cook County, Illinois, both with 20.   In fact, six of the top 17 counties are located in California. 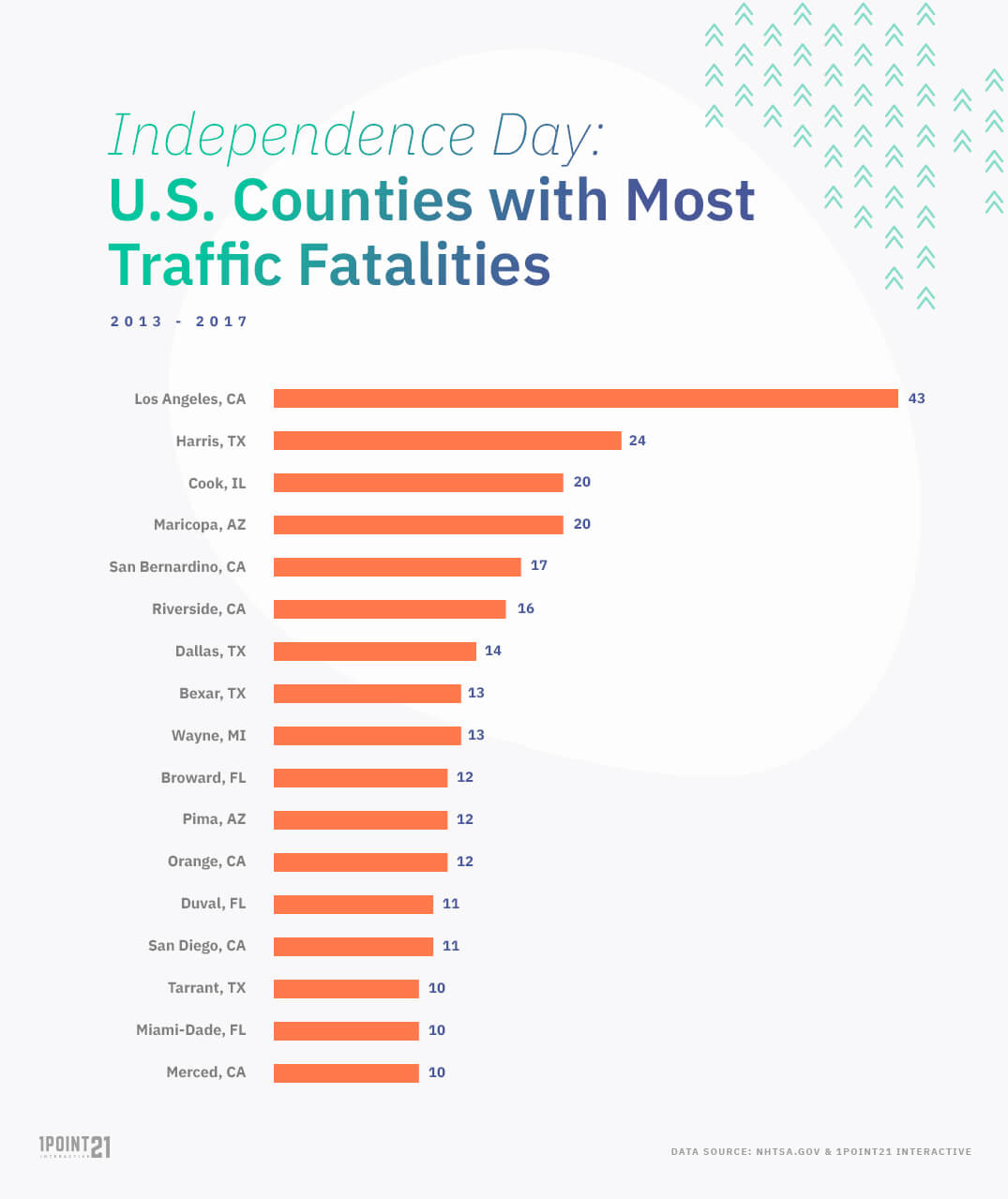 Why is this information important?  Fourth of July Safety Tips

At Paulson Coletti, we hope that knowing the risks associated with this holiday weekend will affect the decisions that people make and how they approach getting behind the wheel.

Here are a few things to keep in mind to keep yourself and others safe:

Our study is based on fatal crash data provided by the National Highway Traffic Safety Administration for the years 2013-2017.

The limitation of this study are two-fold.  First, we were not able to take traffic volume and pedestrian volume into account.  Our numbers are strictly based on fatality and fatal crash totals.   Second, fatal crashes are difficult to predict, especially in low volumes.  This is especially prevalent in the state tables.   While this data is not predictive of future outcomes, it does show that there is a significant increase in fatal crash risk during this holiday period.

Paulson Coletti and 1Point21 Interactive grant fair use of all images and data contained within this study.  If you use our findings or visuals, please cite and link back to this study to give credit to our team.