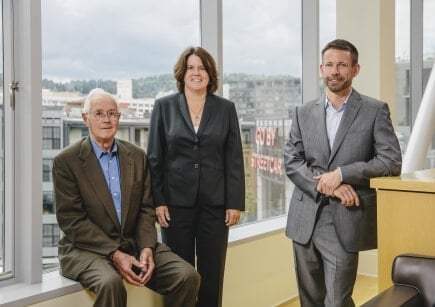 TriMet is Portland’s bus system, short for “Tri-County Metropolitan Transportation District of Oregon.” It operates 610 vehicles (bus, light rail, and commuter rail transit services) throughout the Portland metro. If you were injured while riding a TriMet bus, or injured as a pedestrian or bicyclist, contact the Portland bus accident lawyers at Paulson Coletti Trial Attorneys PC.

IMPORTANT: People injured in accidents involving TriMet need to file a tort claim notice generally within 180 days of the injury, so contact a lawyer right away.

Attorney Jane Paulson represented a woman who was run over in the crosswalk by a TriMet bus and lost her leg. You can read more about that case here.

Can I Sue TriMet?

TriMet is a public agency that is responsible for the safety of its vehicles and actions of its drivers. If you were harmed by or on a TriMet bus, we may be able to help you file a claim. TriMet has been sued in the past. For example, in April 2010 the agency was sued after a TriMet driver struck and killed two people and injured three others, an accident that prompted a safety review. The driver operating the bus at the time was not convicted of any criminal charges, but did get six traffic citations and was fired by TriMet.

A bicyclist from North Portland suffered a broken spine when he was hit by a pickup truck. He ended up suing the city of Portland, TriMet, and the Oregon Department of Transportation, claiming that the bike lane in that area was much too small and dangerous. This might seem strange, until you know that TriMet was involved in the redesign of that stretch of road the bicyclist was injured on (North Interstate Avenue).

According to TriMet, the agency self-insures all commercial general liability and auto liability as required by Oregon’s statutes. Because the agency is self-insured, it does not work with a third-party insurance agency to file claims, respond to claims, and determine fault. TriMet handles all its claims itself. This is important for two reasons: a company will vehemently protect its own interests, and TriMet employees will know their company inside and out. You need a Portland bus accident attorney in your corner who knows the law, how to apply it appropriately, and who is trial-ready.

Paulson Coletti Trial Attorneys PC is a “Best Law Firms” rated practice that is ready and equipped to handle even the most complex cases. While many law firms are content to “dabble” in personal injury, we thrive on it. Our tenacity and trial-readiness could work to your advantage if you or someone you love was injured by TriMet. Contact us today for a free review and learn if you have a case!

TriMet Lawsuits in the News