Posted on September 4, 2013 in Our Blog,Trial,Volunteer Work

Our Portland, Oregon-based trial attorneys are proud supporters of Habitat for Humanity and are actively involved with the local Portland/Metro East chapter. Habitat for Humanity empowers low-income families and helps them attain home ownership. Community members work together to physically build these homes. The impact of the investment community members make, whether in dollars or time, is tangible and visible, which is what appealed to the team at Paulson Coletti. 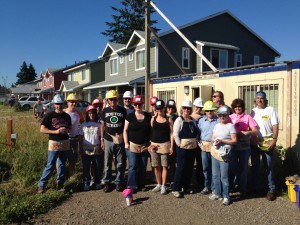 Jane Paulson first became involved with Habitat for Humanity in 2004 when she served as president of the Oregon Trial Lawyers Association. She helped raise funds to build half of a duplex then rallied volunteer attorneys to work on constructing the duplex at monthly build sessions. Jane enjoyed her involvement so much that she continued working with Habitat. She was a board member for two terms, from 2007 to 2013.

Jane recalls several particularly memorable volunteer outings with Habitat. The entire Paulson Coletti office and family members worked at a build session for Chuck Paulson’s 79th birthday and again for his 82nd birthday, where they were joined by the staff of Paulson Investment, which is owned by Chuck’s brother.